Because County Dublin is dominated by the nation's capital and satellite towns, it is easy to forget that it has a considerable number of forest and wooded parkland. Outside of the capital, the landscape is characterised by agricultural land in the north, rising to the Dublin Mountains, south of the city where most of the major forests are located. The coastline stretches from Balbriggan in the north, to the Hill of Howth before sweeping around Dublin Bay and south to Killiney Bay.

Dublin is the third-smallest but most densely populated county in Ireland and has only 6% of its land under forests. As a result, heavy demands are made on its forests and parklands, especially at weekends. The forests in the Dublin mountains and uplands include Cruagh, Massey, Hell Fire Club, Ticknock, Kilmashogue and Tibradden. Others, such as Barnaslingan and Carrickgollogan are located close to the Wicklow county boundary. A number of the mountain forests are being developed in partnership between Coillte and community groups such as the Dublin Mountains Partnership.

The county has a number of old estate woodlands and urban forests, managed by the various Dublin local authorities. The Phoenix Park, which is the largest enclosed public park in Europe has a rich variety of groves and parkland trees. Although small in area there are many beautiful wooded parks including Ardgillan, Newbridge, Malahide and St Anne's, north of the Liffey, and Marlay, Fitzsimons and Tymon to the south. The National Botanic Gardens, which the State acquired in 1877 has over 20,000 plant species including native, naturalised and exotic trees.

The following are the main Dublin recreation forest and parks:

Tibradden, also known as Pine Forest, probably because Scots pine was planted around this area in the past. The oldest pine now in the area is around 100 years old dating to the 1910 plantings. The name Tibradden, meaning House of Bradden or Bruadáin (Teach Bruadáin in Irish), refers to the cairn which is about 1 km southeast of the entrance (E) and car park (P). It may have been the burial place of the chieftain Bruadain. 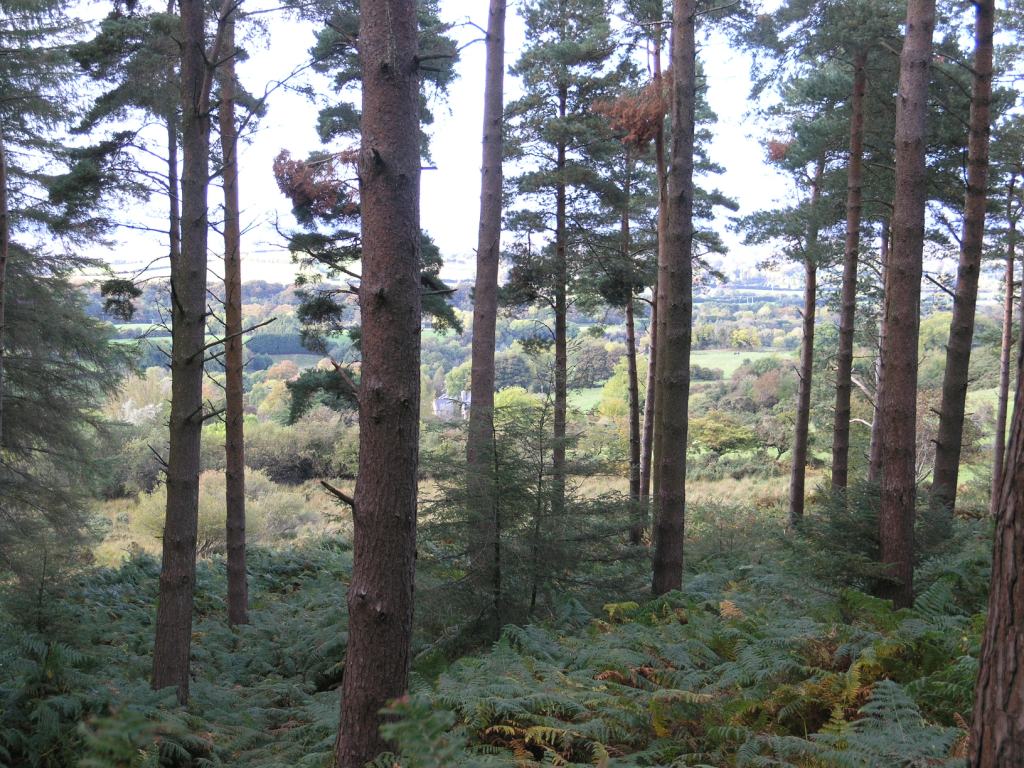 There are some mature beech on the left hand side of the trail at the beginning of the walk, close to the entrance (E). Continue along this route close to a car park that is being constructed (1). There is a pleasant stand of mature Scots pine here and farther on Sitka dominates although the area also has Japanese larch.

Walkers can veer to the right at the next junction (2), heading to the south (3) and back to the car park (P). Alternatively, take a longer walk from the nearby junction (4), heading to the southeast and eventually leaving the forest. This walk traverses the Mountain Access Trail and Wicklow Way.
A number of developments have taken place in recent years to make Tibradden more accessible and also to encourage walkers to explore other forests nearby, the Dublin Mountains via the Wicklow Way and other trails. Much of this has been facilitated by the Dublin Mountains Partnership involving Coillte and a number of agencies and community groups.

The forest is predominantly coniferous, but there is a good herb layer especially where the trees are mature. Plants include bracken, bilberry, bramble and gorse, along with heather in the uplands. In addition, Tibradden has a number of archaeological features, including O'Connell's Rock and a cairn at the summit.

Nearby Cruagh wood is also worth exploring - the entrance is 1km to the east. There are 4.5 km of walks in Cruagh with fine views of Dublin city and bay, and nearby hills, mountains and forests. Massey Wood can also be reached through Cruagh. 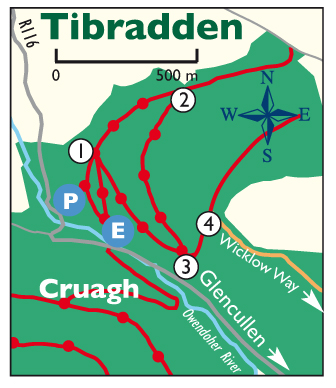